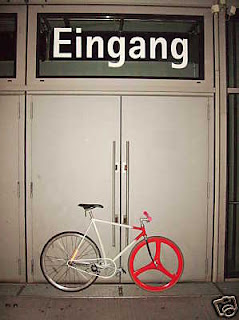 I really dig all these pursuit track bikes so here's another nice one for sale on Ebay right now. Made by Chierici - Scarpa in Parma, Italy, probably in the early 1990s(?). The auction is for the 57cm frame & fork as well as a 650c front wheel. Check out the crazy hexagonal compressed tubing. Like whoa!
EDIT:
Thanks to T_M I just learned that the 'crimped' or 'fluted' tubing is actually called 'Gilco MS' and that it was made by Columbus from mid to late 1980s. However, this type of tubing was quite popular and there were also many variants made by competing brands at the time so not all that type of tubing is necessarily made by Columbus. 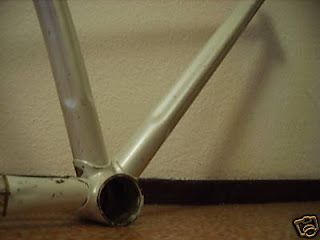 I kept hemming and hawing over a Rossin Ghibli (same tubing) last week... it was a little too big for me but had Delta brakes!

I was suspicious of the sale so I stayed out of it.

My 50 euro Rossin frame is like that. Columbus SLX. Too bad it's broke, then welded, then painted ugly. Though the welds' hold up for a couple years now, so maybe it's time to think about shelling out the bucks for a fancy repaint...