Via Colossal.
Posted by Jussi at 1:05 AM No comments: "A new little product we have out now for 2012 is our new Adjustable Headset Spacer. It is made from hi-impact plastic & will enable various stack heights of 10mm, 11mm, 12mm, 13mm & 15mm. Just rotate the spacer around to rest on it’s various steps to get the different stack heights."

Afternoon in the nature 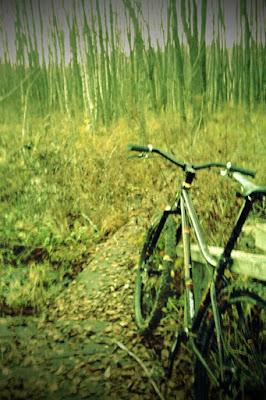 Seoul Got Soul - Save the Bike Lane


[SEOUL GOT SOUL] SAVE THE BIKE LANE (Full Ver.) from David Jongkwon Kim aka DKshop on Vimeo.

"Seoul is not covered up with enough bike lanes compare to the size of the city, so the main purpose of this project is to create bike lanes on the road as a propaganda against Seoul city.

Seoul has been investing huge budget in its bike lane project since 1990s. The initial intention of the project itself was seemed promising. However, the city mistakenly did not consider diverse traffic conditions in each region. The bike lanes eventually caused traffic congestions, and turned out a massive parking space.

The already existing bike lanes along the sidewalks has been dominated by pedestrians and even trees for a long time. You will realize that there won't be any big change even if filing civil complaints. The yellow line on the left side of the logo means protection, so you can see it as we are here to save the bike lanes. No cars are allowed. One more Bike, One less Car" "How the Dutch Got Their Cycle Paths"

"How did the Dutch get their cycling infrastructure?

This question keeps coming back because it is of course relevant to people who want what the Dutch have. Road building traditions go back a long way and they are influenced by many factors. But the way Dutch streets and roads are built today is largely the result of deliberate political decisions in the 1970s to turn away from the car centric policies of the prosperous post war era. Changed ideas about mobility, safer and more livable cities and about the environment led to a new type of streets in the Netherlands."

Via Hembrow
Posted by Jussi at 10:19 AM No comments: 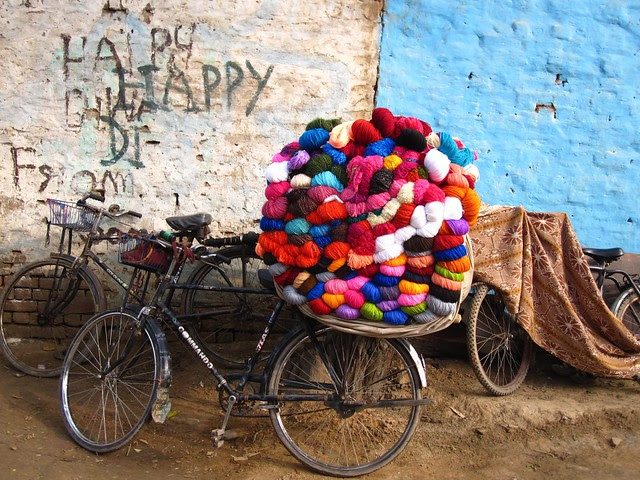 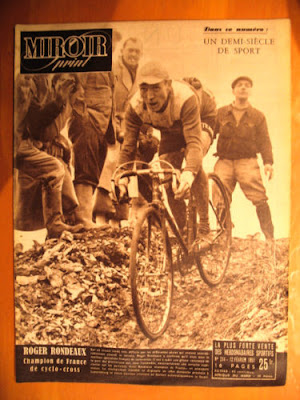 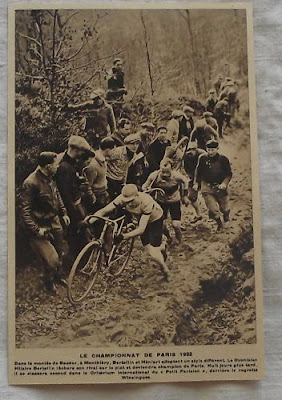 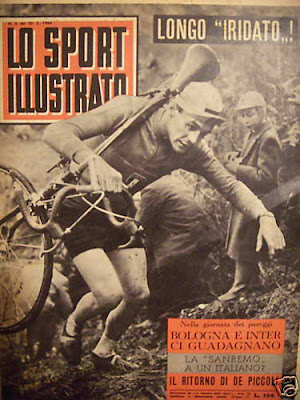 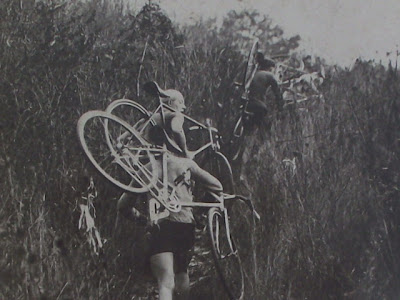 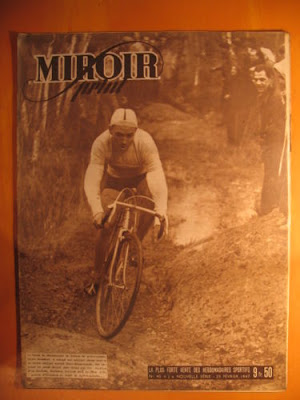 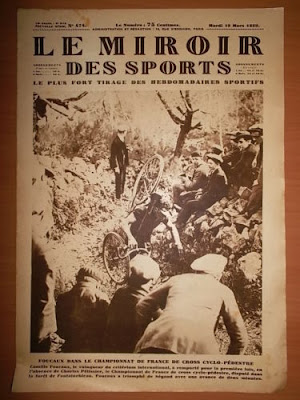 Third race of the unofficial unsanctioned VPCX 2011 Cup in Kivikko, Helsinki. It was muddy as hell, and fun.

The VPCX Cup has been running for several years already and those "V and "P" stand for "Wrong" "Paths". It's a free-for-all cyclocross race series but strictly only those riding bikes with no suspension and drop bars are rewarded precious cup points. While some people rode fixed bikes too, I rode my Beasley 650B SS MTB but wouldn't have earned any points anyway. 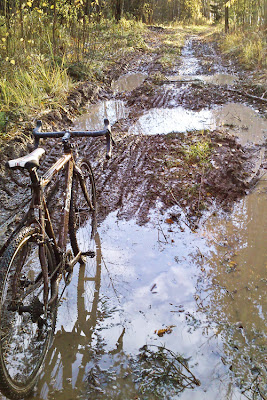 Photos stolen from rodwell & Parker respectively.
Posted by Jussi at 3:11 PM No comments: 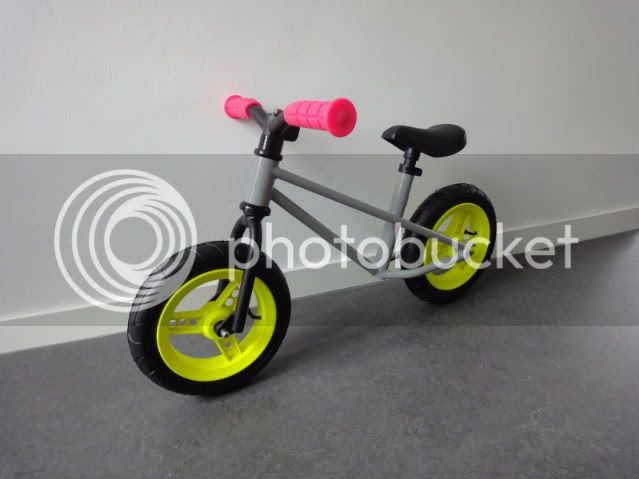 Tnts and Mika teamed up for an alleycat to test their brand new camera equipment a while ago in Helsinki's "outer boroughs". Don't ask me about their cameras, I just don't know.
Posted by Jussi at 11:22 PM No comments:


Hutchinson Serenity from fortiche studio on Vimeo.
Posted by Jussi at 11:35 PM No comments:

Probably the fastest granny bike in the world, owned by Manninen.
Posted by Jussi at 2:38 PM No comments:

Showing the fixie kids the way towards a brighter future.

(Kim gets credit here for pointing things out for me.)
Posted by Jussi at 1:44 PM No comments:

Ain't nothin to it

I stole this from 2Fresh.
Posted by Jussi at 9:06 PM No comments:

For sale by and from the same people out of Turku, Finland, who brought us that fantastic Rossin EL Pista, which was in fact sold pretty soon after it was posted at the Yksivaihde.net. Now let's see if this Tunturi will be given a new home any time soon. I do doubt that.

Thanks for Zigura for the photographic evidence.
Posted by Jussi at 7:52 PM No comments: 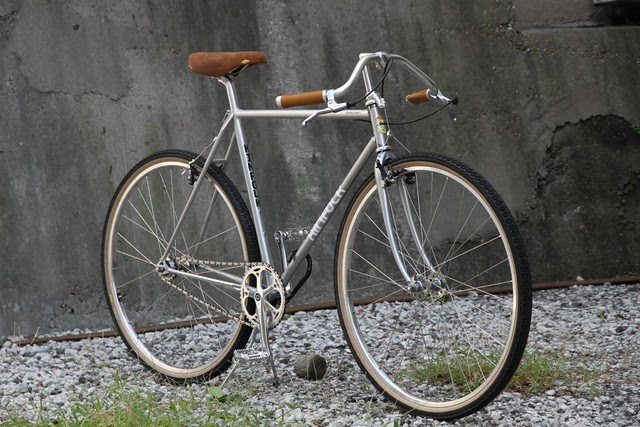 This is apparently a Kinfolk "Urban Bike" built by Kusaka-san but with those canti brakes and fat knobby tyres it appears to me more like an old school single speed cyclocross bike. Which I can certainly dig (despite the pretty awful looking handlebar+stem combo).

Check out KinfolkBicycleCo here in case you're not already familiar with them. 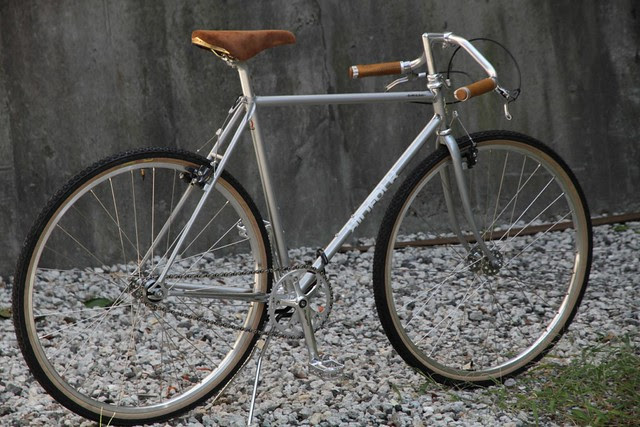 Via Milanofixed.
Posted by Jussi at 11:47 PM No comments:

Risto have me headsup on what's been going on in Tallinn, Estonia lately:

Some pretty popular looking night rides with incorporated movie viewing of cool stuff like of Lucas Brunelle's Line of Sight full movie, Wolfpack Hustle Marathon Crash Race II and a others. Looks like there's a nice scene developing over there!

PX's neat riding video from last winter which I've somehow overlooked and not posted at the time but better late than never, right? The winter is nearing fast and all the blogs are posting cyclocross videos and bikes so why not.

"Winter snow offroad cycling (-14°C) with a cyclocross fixie bike, local forests and woods in Oulu, Northern Finland. Recorded with a GoPro Hero, with a chest mount, 6th of January 2011. It's minus 14 degrees Celsius, that should be about 7 degrees Fahrenheit."
Posted by Jussi at 11:13 PM No comments:


Massan x Macaframa Raw from MACAFRAMA on Vimeo.
Posted by Jussi at 11:38 AM No comments:

This made me LOL a little as it's part of my daily commute. That same block has been under construction works for well over a year now and the street is blocked just like that every damn day. So future. More info here.
Posted by Jussi at 11:40 PM No comments: 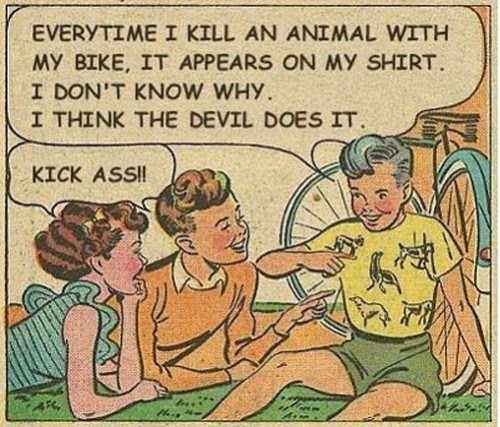 Ritari_s found this. Thanks.
Posted by Jussi at 6:08 PM No comments:

Good deal for a good cause from Chrome:

"LTD PINK KURSK: ONLY $40 + FREE SHIPPING, HELP KEEP-A-BREAST! In honor of Breast Cancer Awareness Month, check out our limited run Kursk Pink for only $40. All the tough, durable build of our bike to bar footwear plus $20 of each pair purchased goes directly to Keep-A-Breast!! And for a limited time, free ground shipping both ways on all shoes!"

The Keep-A-Breast -logo reminds me a bit of the HIM Heartagram symbol, so despite all the Jackass/Bam Margera connections the band might be best known for I need to rep my hometown boys a bit here: 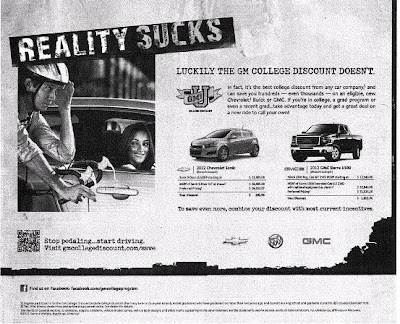 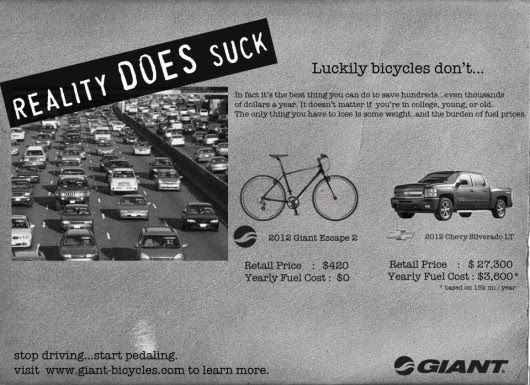 Get the whole scoop HERE, from L.A. Times.
Posted by Jussi at 2:53 PM No comments: 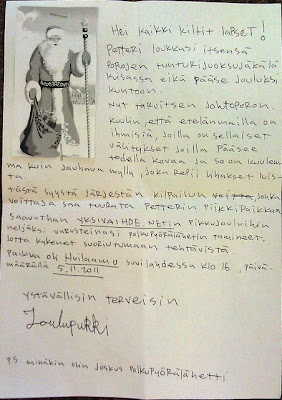 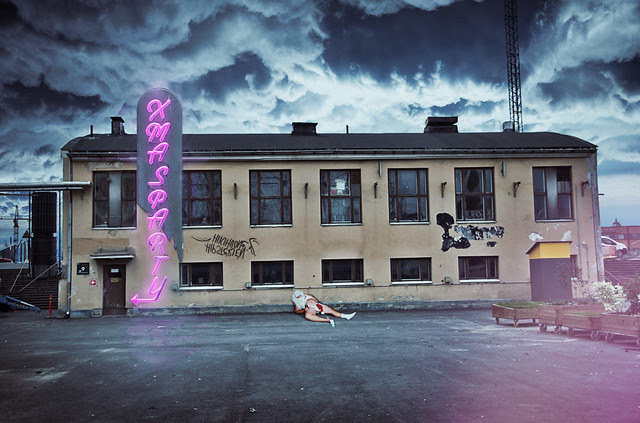 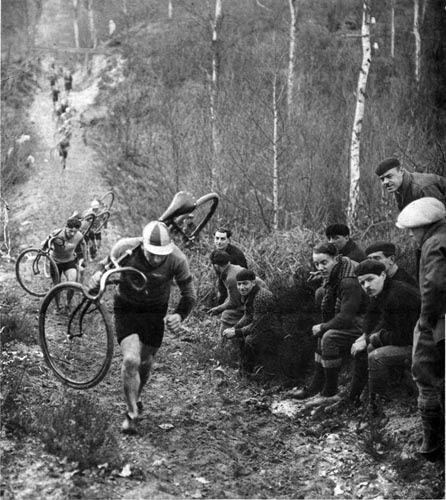 "Remember, racers still didnt trust the derailleur even into the 1940s, and that held for cyclocross as well - bikes were largely single-speed, often with a fixed wheel. Brakes were still largely sidepulls at this time as well."

From here, and there are many more awesome pics there too.
Posted by Jussi at 11:41 AM 1 comment: 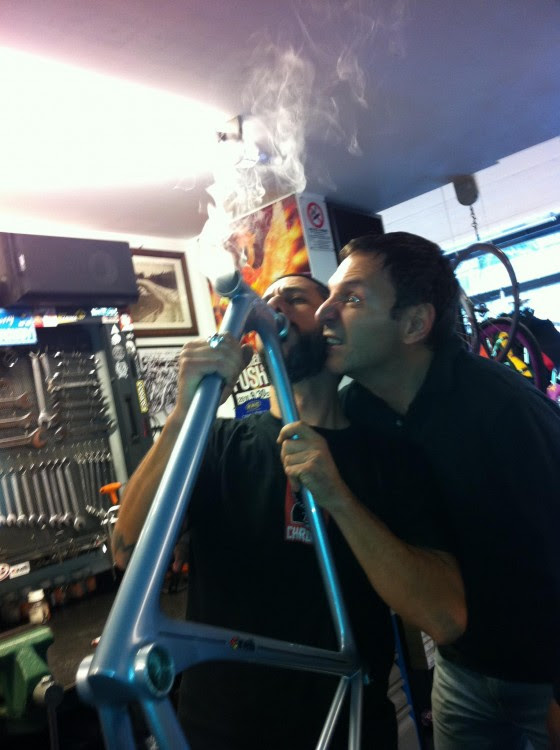 Via Milanofixed.
Posted by Jussi at 11:01 PM No comments: 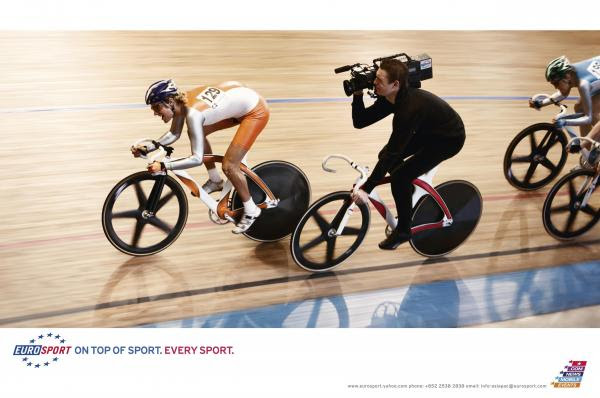 Via The 5th Floor. 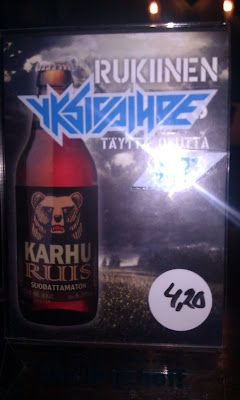 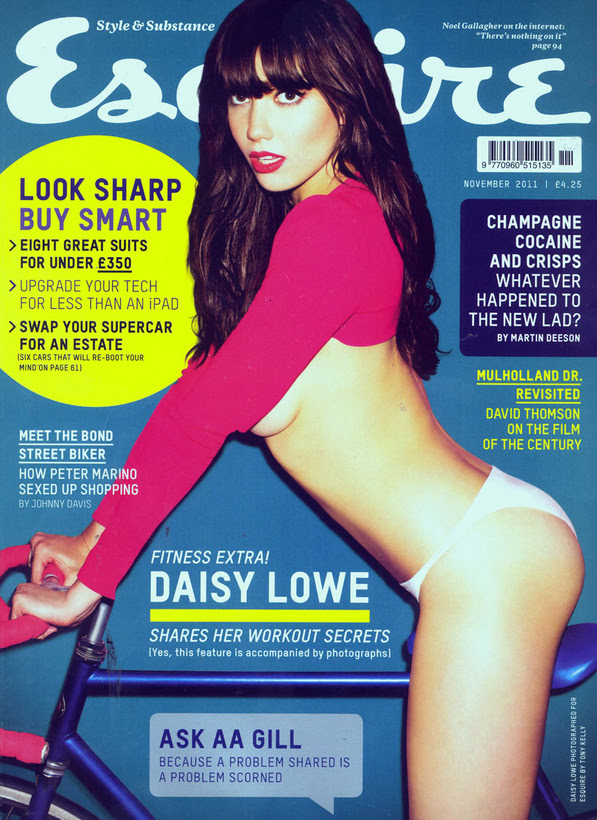 You can now buy the new cromo VISP Pista ARC GT-Dragon from here. Like whoa!

There actually seems to be two other new VISP models there as well, here and here, but IMHO they're nowhere near as radical! as the one above.

Just add a dash of neat colored parts and the funky tribal tattoo dragon design will go so good with some Ed Hardy accessories...

EDIT.
Now in all seriousness guys, DO NOT BUY VISPs because it seems that EU officially labels selling them as  dumping and charges extra sanction duty of 48.5% on importing them:

Let's clear things up a bit: it turned out in the end that the sanction duty does not apply to VISPs because they're apparently actually manufactured in Taiwan, not in mainland China, or People’s Republic of China. They also claim to be "Designed in Italy" or something like that. Believe that if you will but I still wouldn't encourage anyone to waste their money on buying crap like VISP but that's just me.

"Scott brings art to its bicycles with one of today’s most influential and exciting young French artists, designers and musicians, known as GREMS. He is a multifaceted man with many preferences, who puts his own character into every masterpiece. With hand-drawn signs and lettering as well as bold graphics and graffiti, he convinces artists and turns public space into open air artwork. Nothing is to be expected from his paintings, drawings and designs. GREMS’ latest rise to a challenge was for the SCOTT urban bike collection 2012, where he designed two exclusive bikes – one SCOTT OTG, a so called Fixie, and one SCOTT SUB."


Tom La Marche for Specialized from Uncle Buck on Vimeo.

Nice. P-Fix will be THE s**t as a cheap FGFS complete, that's for sure.

But what's going on with the crappy editing? The music ends too early etc. One would think that a company like Specialized has the marketing budget to get things done proper. Or is it just to make it look 'raw', 'legit' and all DIY? That's pretty weak IMHO.
Posted by Jussi at 10:40 AM 5 comments:

"For a tablet that prides itself in being thin and lightweight, the latest Samsung Galaxy Tab 10.1 accessory sure adds considerable heft to the device. The Korean manufacturer's UK branch has teamed up with 14 Bike Co to bring the world the Samsung Galaxy bicycle -- a mild-mannered bike with a custom paint job and a detachable holder for the Galaxy Tab 10.1 made from carbon fiber. So, why carry a tablet on a bicycle? For checking things like mileage planners and route trackers on the go, apparently. No word on pricing yet, but we're guessing that this'll be among the more expensive tablet accessories out there."

Bali from Rayyiu Radzi on Vimeo.
Posted by Jussi at 10:41 PM 1 comment: