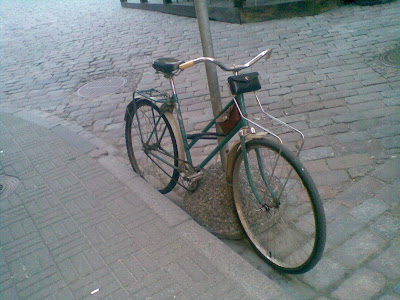 I visited Tallinn the capital city of Estonia on business for two days last week and as a result of my trip here's the first part of my admittedly rather limited Tallinn Fixed Gear Scene Report.

So to cut to the chase, apparently there are no fixed gear bikes in Tallinn, period.
I mean, I didn't see any during my stay and when I visited the city last time and spent five days there last September I didn't see any fixie bikes or stuff either.
No disrespect to my Estonian sisters and brothers but it kinda looks a little like the Tallinn people have been all too busy making money-money during the recent few years' credible economic boom that cycling trends such as this hasn't really registered over there.

I did see, though, lots of people on boring supermarket mountainbikes and one bike messenger but he was riding a geared MTB/ATB bike. I also saw one hipster/art student-ish looking girl who was riding an old men's coster brake bike (didn't catch a photo, sorry...) with fenders and shit taken off and the bike had been very recently painted bright red so obviously she was trying at least a little bit.
On the other hand, I did see several roadies all clad in spandex and riding nice looking and very expensive road bikes, so at least there's some serious cycling thing going on there. This also fits nicely to my hypothesis about all the money-making and the cultural yuppie-aspect to do with that.
I did also see a bunch cool old old Soviet-era single speed coaster brake bikes like the pic at the top but as I said, no fixed gear bikes whatsoever. I visited two local bike shops (Velo24.ee & RattaPood) but didn't see one single piece of equipment that could have been considered fixie/track specific. There were some BMX parts, though.
I also visited the Velodrome (YES!) but I'll save that for the Part II of this report. 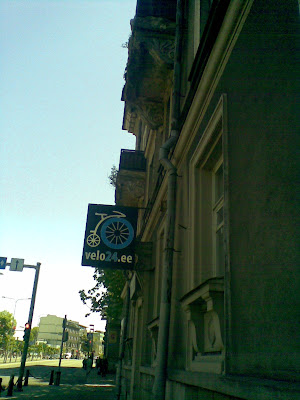 However, despite the disappointingly non-existent FG scene, Tallinn does have something cool there bike-wise. The traffic sign design for cycling was super fresh, just look at this nice sign, racing bike, or is it actually styled on a proper track bike(?!), with drops and all, instead of standard bike that most of us are used to in our traffic signs. Well done! 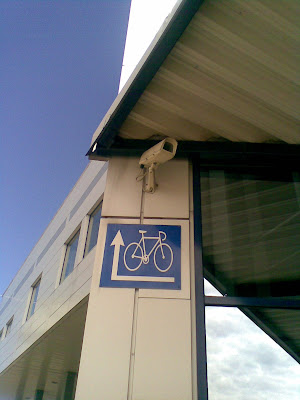 But hey, if there are any Tallinn or Estonian people reading this and I got it all wrong, please correct me. However, just to strengthen my argument, when I returned home to Helsinki and took a 10 minute tram ride home from the harbour, during that time I randomly saw three fixed gear bikes. So even if there really aren't THAT many FG bikes here, compare that to the time I spent hanging out in Tallinn.

Ha, come to Riga in Latvia, and we will show you a latvian fixed scene!

ok, you're quite right. there's really no fixed gear scene here. right now just pretty much myself. i lived in Amsterdam before and rode there. there might be some newcomers though after the snow will melt. after some articles in my magazine and some movie screenings people seem to get interested.

we do have a pretty healthy bmx scene though with one of the best events out there (www.session.ee, sorry for raising my own tail, hehe) and a nice shop www.mysticbmx.com (sorry again) ah yeah, and we have a velodrome and people do ride there.

But winter's quite dead from bike POV, perhaps 10-20 active daily riders/commuters in the whole Tallinn (based on my semi-daily 8-9 km commute). Half of them adults on off-the-rack MTBs and perhaps another half teenagers on BMXs.

And Risto can correct me but I don't think any of our bike shops offers fixed gear stuff. Internet's our friend.