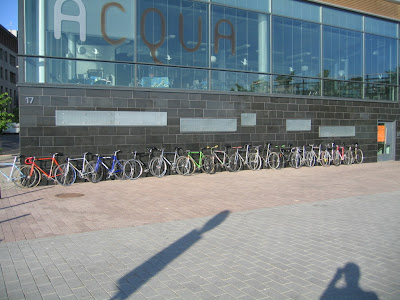 NOTE: If you're not into reading my rambling posts, jump directly to the video below. It's the beef here, so to say.
Yesterday night was the second Wednesday Fixed Gear Tricks Session organized by the www.yksivaihde.net forums. We had a much better place at the Kaapelitehdas than last week, about two times more people than last week showed up, some with serious skillz (more about that later...), we had beers and all that. All in all an excellent night with nice people. Check out some more pics here.

Aapo came and did 57 backwards circles in a row and quit only because his 'arms were getting tired...' so I think we have our local Backwards Circles Champion right there. He's been apparently riding a BMX before so that might explain something. He also did a footjam tailwhip on Jouni's Bianchi Pista.

Besides Aapo, Ilkka & Jouni also showed the rest of us how it's done. But then things got bit out of hand, so to say. The Finnish people are know for some habits, which might sometimes appear slightly bizarre to people not born here. We've invented the Nokia mobile phones and created some cool modernist architecture & design but we've also invented the Eukonkanto as a competitive sport.
Well, just watch the video of those dudes and the (in)famous Trackstand Folk Circus.