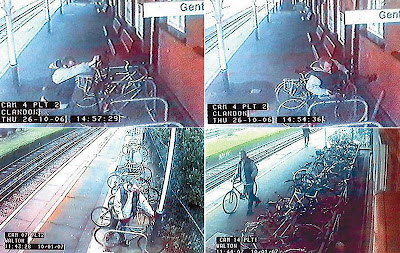 Once more concerning bike thieves, this time serious news from Amsterdam:
"AMSTERDAM (Reuters) - A Dutch cyclists lobby group plans to teach more people across the country how to steal bikes after lessons it conducted in the big cities showed that bike owners became more security-conscious after taking the lessons.

"Someone specialized in locks shows people how to unpick them. This teaches people how to better secure their bikes," a spokeswoman for Dutch bike group Fietsersbond said on Wednesday.

Fietserbond will tour the country, offering its bike theft lessons which has so far helped students moving to the cities like Amsterdam and who usually poorly secure their bikes, the group's spokeswoman said.

"If freshmen move to the city with their bikes, it is a party for bike thieves," she said.

The government launched a campaign on Wednesday, urging people to report bike theft to the police and make a note of their bike's identity number."
Posted by Jussi at 10:57 AM