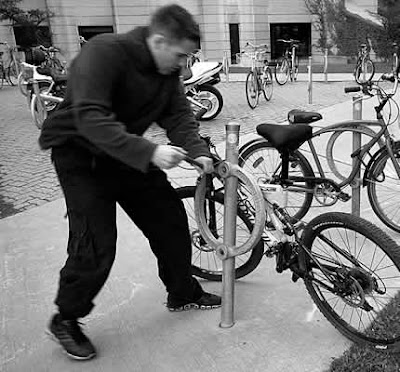 After yesterday's happy news there's today's sad news. It's like the ying/yang thing, I suppose.
My colleague Giac AKA Interflug just called me five minutes ago that his bike had been stolen from their court yard in Limingantie Kumpula, Helsinki, during the night. The bike was locked to a bike stand and all. Giac is all fucked up now because he cannot get to work, which sucks.
His bike was almost brand new-looking nice sporty Tunturi geared mixte ATB bike, it's also pretty recognizable as it was a blue & white Markkinointi & Mainonta Special Edition and there aren't that many of those around. The bike has a bright yellow Selle Italia seat and Shimano components.
Kumpula is a peaceful community with lots of wooden houses with kind of a slightly bohemian vibe so stealing bike's from a closed yard behind the house during the night hints that the bike was probably not stolen by drunken teenagers needing a ride.
There are no photos but if you see a bike fitting to that description somewhere, let us know. Beer reward is offered if the bike is found.
Also, don't forget to check out Giac's 'Jack and his amazing ukulele / Giacomo e il suo incredibile ukulele' MySpace page and listen to his cool original songs (with titles like 'The Day That Britney Died'...) that he performs with an Ukulele. Well, now he has a reason to write a melancholy song about his bike that's gone.
Posted by Jussi at 10:26 AM

So. My trekking bike (with a million speeds) was stolen by hellspawn demon thug assholes out on IsoRoba yesterday, and so I've had a bit more motivation to actually do my DIY fixie project out of an old Crescent road bike I found in a dumpster a few weeks back. Naturally, checking out fixie stuff on the intertubes, I find your site, and naturally, 'cause you post about bike thieves, I click.

And I was looking at the picture there and thought "that's funny, I didn't think Kumpula would have the same bike stands as you'd find in Toronto," and then I looked tärkeämmin and noticed that I've probably locked a bike to that very stand. It's in front of Robarts Library at the University of Toronto, where I did my undergrad. lol. Ah, the stolen bike memories.

Incidentally: number of bikes stolen from me in Toronto in 6 years: 2. Same amount of time in Helsinki: 4. This city is twice as fucked as T-dot!

yeah, the pic wasn't from Kumpula as you pointed out. But my friend hasn't got his bike back either. He did get some money back from his insurance, though.

But hey, go on with your fixed gear conversion project, you will like it, ;)

Go to the Kumiluoti shop on Fleminginkatu 12 and tell them to build you a proper fixed rear wheel and you're ready to go with your Crescent.