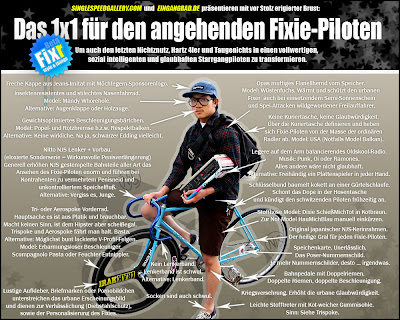 I've been blogging about those pesky little hipsters on fixed gear bikes recently. And I also admitted that in a way I myself might fall into that category, if one looks strictly at stuff like clothes and gear.

Well, it's been all good but now some Super Aggro 100% Poser Free German Single Speed MTB Jocks here and here are unfortunately taking the hipster hating a bit further. Check out the pic above. Here's a (bad) translation of the texts, courtesy of John Prolly's nice blog:
"Left Side:

Cheeky hat made of imitation denim with wannabe sponsor logo
Insect-resistant and stylish "nose-bike" (slang for sunglasses)
Model: Mandy Whorehole
Alternative: Eyepatch or "wood-eye" (like the eye in a plank of wood)
Weight-optimizied acceleration baby-beard
Model: booger- and snot-retardant "respect beam" (I think this is more unusual slang for mustache)
Alternative: None, really. Ah, well, maybe black sharpie.
Nitto NJS handlebars & stem
(limited edition anodized = powerful penis enlargement)
NJS-stamped track components generally increase the style and standing of fixie-pilots and will give your rivals even worse penis envy and make them salivate uncontrollably.
Alternative: Forget it, kid.
Tri- or Aerospoke front wheel
Most important is that it is made of plastic and is usable (I could be wrong if Platik isn't a typo for Plastik)
It doesn't make sense, but hipsters don't give a shit.
Trispokes and Aerospokes ride steady. End of story. ("ride steady" is a guess)
Alternative: Preferably a colored deep-V
Model: (no idea here) Accelerator, Scumpagnalo Pasta or Clammy Nippleator.
Funny stickers, postage stamps or pornographic images emphasizing urban appearance and uglification (theft deterrence), as well as the personalization of your fixie.

Grandpa's stuffy flannel shirt from storage
Model: Desert Fox. Warms and protects the urban fixer from incipient semi-sunshine and spy attacks (?) from crazed freewheelers.
No mess bag, no credibility.
Fixie-pilots use the mess bag to distinguish themselves from the masses of ordinary bike riders.
Model: USA (Balkan model, if need be) (maybe)
Ghetto blaster casually balanced on the arm
Music: Punk, Oi or Ramones
Anything else would not be plausible.
Alternative: Riding no-handed with a turntable in each hand.
Bunch of keys dangling flirtatiously from a belt-loop.
Spares the dope in pants pockets and heralds the sweaty pilot precociously.
Cloth pants Model: Dixie ShootMeDead in doodoo-brown.
In a pinch: BiteMeBlue, hand-shortened.
Original Japanese NJS Keirin frame.
The holy grail of every fixie-pilot.
Spoke cards. Imperative.
Spoke cards are the poser's license plate.
The more license plates, the more... something.
Track pedals with double straps.
Double straps, double acceleration.
Battle scars. Boosts urban credibility.
Cloth sneakers with soft-as-shit rubber soles.
Reason: see Trispokes.
No bar tape. Bar tape is gay.
Alternative: Bar tape.
Socks are also gay."
Obviously all of that is supposed to be humor and it is pretty funny, but: picking on stuff like this and calling  things 'GAY' (=Schwul) is in my opinion really only a small step a away from evil stuff like gay-bashing etc. Basically it's an illustration of  "You're not like us, you're different, you and your bike is stupid, we hate you!" -type of mentality.
So here's my regards:
Hey guys! Just start wearing those cool Swastika armbands again, will ya?
Anyhow, this just goes to show how divided and full of ill will the cycling world is on the inside. And it also proves that the fixed gear trend is blowing up big time in Germany.
Posted by Jussi at 3:37 PM

Hipsters with fixies are dangerous.

Fixed gear bicycles are to be ridden with precaution, and should only be ridden by people with experience in cycling, not fashion.

I understand the hate.

Hold on. Given the context in which the word 'gay' was used, don't you think the author of that picture is actually satirising the fact that hipsters use the word 'gay' to describe stuff that they don't like?

"So here's my regards: Hey guys! Just start wearing those cool Swastika armbands again, will ya?"

Why so defensive? Did that hit a little too close to home for you?

Bernard is right, maybe that article did touch a nerve

Ok, as a native German who has been living in the US for years, I may have to weigh in here. In our language, the word "schwul" (gay) is a much more harmless term than it may seem to an American. As a general rule, Germans tend to be WAY more "relaxed," I guess you could say, about throwing around terms that to an outsider would seem horribly offensive. We don't have the same culture (or should I say, facade?) of "PCness" that I observe here in the US. Calling something "gay" does not say anything about someone's attitude. As a teenager and young adult in Germany, I called stuff "gay" all the time, and I consider myself a highly tolerant, liberal and easy-going fellow. I am a strong supporter of gay marriage, respect any gay individual and am a good friend to some wonderful gay people. So I guess all I'm saying is that while a lot of the terms we use in German slang may sound horrible to someone not intimately familiar with our culture, we don't really mean them. We are just trying to be funny and/or cool.

Oh, I forgot to add that yes, whoever said the following nailed the original intention of the usage of "gay" in this cartoon:

It's supposed to mock the way hipsters talk. They call stuff "gay" left and right.

Berlin made fixies illegal. Pretty awesome if ya ask me. I just wish we had a law here requiring brakes. The hipsters on campus ride with their heads up their arses. I've almost been run over twice by them while walking and also had one swerve in front of my while driving. They are a liability to the cycling community and I hope this idiotic fad dies soon.