The Laoshan Velodrome in Beijing, China. 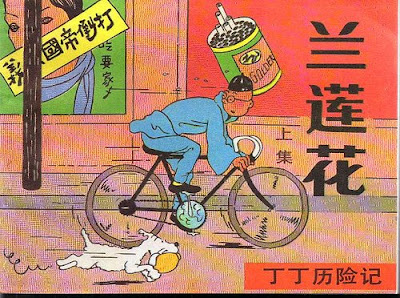 Ok, I'm heading off to Beijing for the Easter holidays and I'll be back next week. So no new posts here until then.

Apparently the fixed gear thing hasn't really caught on in China yet but who knows what I will find there? Most of the world's cyclists are in China, after all.
And just look at the pic above, Tintin was apparently riding a brakeless fixed wheel track bike in China already in 1936 when his adventures in the album The Blue Lotus did take place.
Also, the brand new Laoshan Velodrome built for the 2008 Olympic Games look pretty neat in pictures.
"The Laoshan Velodrome track is 250 meters in length and 11 meters wide. The wood-surface track has a seven-meter race lane and a four-meter safety lane. The track is banked at between 13 degrees and 47 degrees, according to the standards set by Union Cycliste Internationale.

Track Cycling has been a part of every edition of the Olympic Games, except for the 1912 Games in Stockholm.

With just 90 seconds separating them, the contenders compete for time, and the cyclist who completes the course in the shortest time wins.

Track cycling races are held on an oval track -- the velodrome -- that is banked, with the outer track being higher than the inner track."
Posted by Jussi at 11:20 AM

hey did you go to the laoshan velodrome?

I'm going to china in a few months, and I was wondering what there is to do over there fixed gear related :)

Hi, unfortunately I didn't do there after all.

There was so much stuff to do & see and the velodrome was totally on the other side of the city from where we stayed. And it's a BIG city. There wasn't so much FG related stuff there but I would recommend that you rent a bike and ride around, there were plenty of bike rental places to be found, and especially ride in and around those old hutong alleyways, they're cool.

If any fixed gear rider comes to Beijing then contact me and let us ride together!
contact me