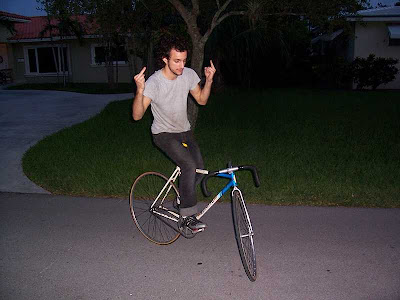 Today's The Observer has an article on Fixed Gear bike culture/trend, written by 'Style Correspondent' Alice Fisher. Not everyone on http://www.londonfgss.com were very happy about it...
Moving Target shines some more critical light on the article, if you click this.
Anyway the article, here you go:
"Riding a bicycle without brakes sounds like a rash move, but a new wave of cyclists is eschewing traditional bikes for a stripped-down machine known as a fixed-gear. It is one of the most basic machines you can build with two wheels. A fixed-gear bike – or fixie – has no derailleur as it has only one gear, so as long as the wheels turn, so do the pedals. Its rider can’t freewheel and the only way to brake is to stand on the pedals.
The fixed-gear’s renaissance supposedly stems from West Indian immigrants in New York working as cycle couriers in the Eighties. They had used them at home because they were cheap and easy to maintain, and continued using them in the US. Their popularity spread throughout the courier community, crossing to the UK and other countries.
As the fixie craze has taken off so has the number of new riders who enter ‘alleycats’ – unofficial road races consisting of a series of checkpoints on a set route. Alleycats originated in America and were organised for and by cycle couriers but now inexperienced riders participate. Last Sunday in Chicago, Matthew Manger-Lynch, 29, was killed in a collision with a four-wheel drive vehicle after running a red light. He was competing in an alleycat known as Tour Da Chicago. A similar race – the New York Monstertrack, normally the biggest annual alleycat in the US – was scheduled to take place on 8 March, but was cancelled after the Chicago death.
These races now take place in British cities and threaten to colour public opinion of the growing urban cyclist subculture. Around 30 cyclists took part in one organised by art students in central London last Thursday which finished with a party at a bar in Hoxton. Roxy Erickson, 28, who is part of the women-only Trixie Chix collective, said: ‘Media reports don’t show the community spirit or the eco-friendly side of cycling. A working messenger [courier] who got hit by a double-decker bus wouldn’t get as much news space.’ The strength of the fixed-gear community is demonstrated on the messageboards that are full of updates on the welfare of cyclists injured in accidents, invites to parties and gallery openings as well as alleycats, which are often held to support injured cyclists or promote causes such as the war on drugs.
Andy Ellis, 28, who is part of the London Fixed Gear collective and builds fixies, explained why the bikes were so popular. ‘You can’t get more linked to a bike than on fixed-gear. There are aspects which compare to skateboarding. You enjoy travelling through the city in the same way, but on a fixed-gear, it’s faster and you have more control.’ The fixie’s simplicity and grace appeals to the fashion conscious, many of whom take customisation to extravagant levels, creating bikes with imported track-bike frames and hand-built wheels that cost thousands. Ellis said: ‘At first it was anything to get them on the road, but I’ve built three bikes for one guy in the last year and every time he comes back he wants something more exclusive.’
The international fixed scene is now getting mainstream attention, including official sponsorship from bike companies. A cyclist known as Superted – part of the Fixed Gear London collective – is sponsored by cycle brand Charge Bikes. There’s also the Bike Film Festival, now in its fourth year, which showcases films documenting cyclists’ tricks and agility. The most successful fixed-gear film is Mash SF, which features the Mash SF collective riding in San Francisco. ‘It’s the first big film about fixed-gear trick riding,’ said Laura Fraser, the London producer of the festival and a fixed-gear rider. ‘It’s gone around the world.’
Tom Bogdanowicz, of the London Cycling Campaign, the largest urban cycling organisation in the world, says: ‘Fixed is enjoyable and good for fitness, but you have to acquire riding skills. Once mastered, the bikes are good for urban cycling as they make you very aware of the road and you can maintain speed at a level that’s suitable for traffic. They make you think ahead.’ He suggested that anyone wishing to try fixed in London should go to Herne Hill Stadium where low-cost training sessions were on offer." 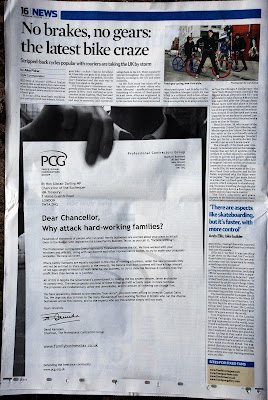