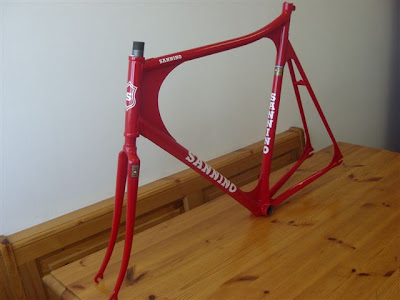 "The Sannino Cycles came constituted in 1978 to Turin (Italy).

The founding associates were: Sannino, Sannicandro, Cavallito and Brusaschetto, had the scope to produce chassis for racing bicycles of high range. Mauro Sannino and Sannicandro were the “technicians” of workshop, both had had handicraft experiences in the precedence activities. Mauro was the "telaista" of the group. The Sannino Cycles had center in Via Montemagno, near the Velodrome of Turin.

The Sannino Cycles supplied bicycles to the national ones of the countries of the European east of the juvenile fields, introducing themselves to international level and exporting the Italian product also in the USA. The springboard of launch for the Sannino products, through which the same ones were known in the world, laughed them to 1981, year in which the Turin company sponsored the National Poland and feminine USSR of categories juniores male and olympic.

In 1984 the Sannino Cycles were signaled between the first manifacturing companies to insert a new model of destined chassis to the chronometer on road, a model then realized from other producers and used also from Francisco Moser and its famous Hour Records.

Some names of runners legacies to the Sannino brand of those years, that they have contributed to make to know it and to appreciate: Santysiak, that it came from the national one of the Poland, Stefano Baudino, big of the time trial from olympic to Los Angeles.

Then a decrease of interest for the wrought steel chassis by hand, and aggravated moreover from a serious familiar mourning, carried the Sannino at the close. But the ability to Mauro Sannino came recognized from Corratec, German factory for which still today it works.

This chassis was constructed for Patrizio Rampazzo, 7 times Italian Champion Tandem and Vice World-wide Champion of the Juniores Sprint."

And as it happens, there also a nice geared Sannino road bike on Ebay at the moment, check it out here. 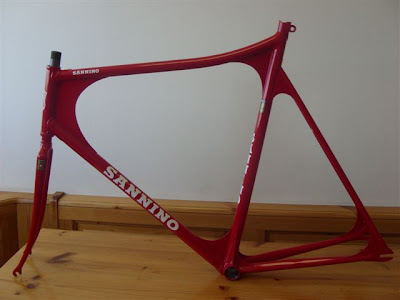