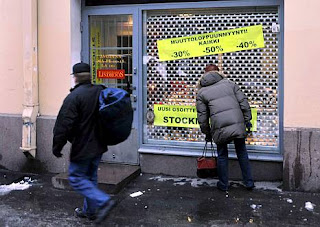 This news from Helsinki is so amusing that I need to share it to you.

"Early on Wednesday morning a man broke into a small jewellery store on Fredrikinkatu 32 in downtown Helsinki. The burglar filled a plastic bag with expensive watches and made off on a BICYCLE. The police got the alert at 03.49 but when they arrived on the scene the burglar was already gone.
However - and now we get to the real funny part - only two blocks away, on the corner of Lönnrotinkatu, the guy apparently FELL on his bike.
The police suspect that the loot bag the guy had hanging off the handlebars GOT IN BETWEEN THE SPOKES OF THE FRONT WHEEL causing the thief to fall.
When the police arrived on the spot, they found tens of thousands of Euros worth of watches laying all over the street. The thief was gone, however. The police question whether the thief actually managed to get any of the loot with him."
Posted by Jussi at 10:47 AM