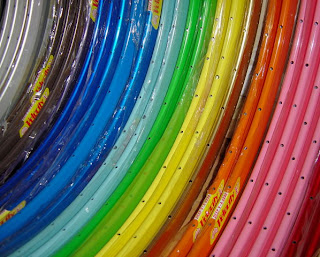 Here's bit more info on the Velocity's new deep aero rim B43 that a company representative has posted on Trick Track forums.
* * *
"We are working hard on getting this rim to market. If all goes as planned, they should be readily available this spring. It is called the B43, because it is 43mm tall, making it 1mm taller than our very worthy and formidable competition.

It's hard to compare it to the Deep V. The B43 will be heavier than the Deep V, it's hard to say how much yet.
As for multiple drillings of the B43, we do plan on that, you guys doing tricks have been evolving and you're at the point now where you are doing some rather insane manuevers. We were not thinking of going down to a 28h though. Less spokes is usually indicitive of some one wanting light weight, the B43 will not be light.
It is a work in progress, we have actually received two different batches of extrusion and we are not quite satisfied yet. We are seriously considering modifying the design again and making the B43 wider. Can you imagine a 43mm tall rim by 24mm wide with 48 holes?!?! I'd say that would be just about bullet proof.

We definitely plan on doing a variety of drillings, at least 32h, 36h, and 48h. 650c will happen eventually. A variety of colors too. While they won't be the lightest rim on the planet, they shouldn't be a boat anchor either. The final product should be somewhere between 710 to 730 grams. We could make it lighter, but durability is our main concern.
As for price, it looks like we'll at least be competitive. Making good rims is not a cheap endeavor, sure we could source them out and have them made in China, but that would be selling out in my opinion."

* * *
So the rims will be super heavy. Also, talking shit about your competitors is not very nice, no matter how big your company in on the market.
Source: http://www.tricktrack.org/forums/viewtopic.php?t=1126
Posted by Jussi at 8:50 PM

"Also, talking shit about your competitors is not very nice, no matter how big your company in on the market."
I completely fail to see any of this. He describes their competitors as worthy and formidable. Maybe theirs a little sarcasm there but come on, that's a part of what we call "competition" in capitalistic world ;)

Agreed. I don't really see any negative mud slinging here aside from making their product look better than a competitor. It's not a world of kisses and hugs in business.

On a side note, where can I get a set of these rims?

Let me just say that if I came across as trashing my competitors, I apologize. That certainly was not my intention. I was being sincere and genuine when I described them as worthy and formidable. Was it something else I said? There is enough negativity in this world, I do not wish to add to it.

"we could source them out and have them made in China, but that would be selling out"

if that was meant to be a reference to hplusson.. hsons were designed in china by a man who lives in china, do having them made in any other country than china would be outsourcing