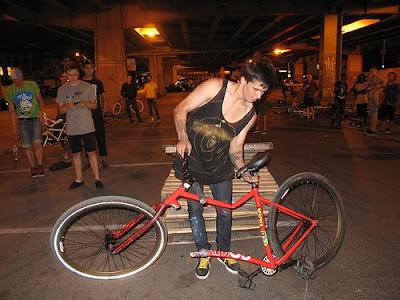 "SCHWEIZER TREND MARK BANKRUPTCY
Gorilla Bicycles is at the end of the beginning of July the bankruptcy of the Zurich Fixie specialists was opened.

Last Tuesday, the bankruptcy of the Gorilla AG Zurich was published in the Official Gazette of Commerce. It is clear that the district court by the company first has dissolved July 2010.

Gorilla had created rapidly as a young brand in the Fixie scene a name. The bikes from Zurich were not only in his own shop, but also offers a few selected bike shops in Switzerland and in in stores in Europe, America, Asia and Australia. affected by the bankruptcy next to the gorilla-founder Thomas Schreier are the brothers of the same Friday worship bags manufacturer. They were entered only in the past year as investors gorilla.

No influence again Friday-business
Reiterates At the request of Ride.ch Markus, Friday that the failure of gorilla not exercise control over the business with the bags and fashion accessories made from recycled truck tarpaulins has. Even the free Fixie rental system "get a free fix," which has built Friday for the five brand stores in Zurich, Berlin, Hamburg and Davos in the cooperation between gorilla running, remains free."

Sorry dude, it's there now.

prolly you got too much attitude!