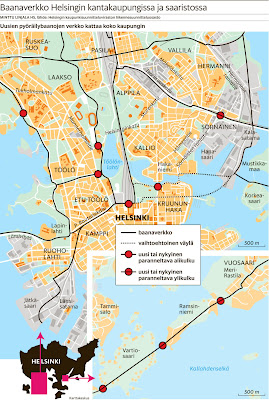 The main idea here is that these new paths would be much better separated from the pedestrians and cars than the current bike lanes, which would still be there too, of course. Also, the new paths would allow the cyclists to travel much more efficiently, faster and safely especially across the downtown area.

I really like this plan. Now let's see it happen, and soon. Obviously the politicians need to cough up the money for it first, which will be a problem, as always.