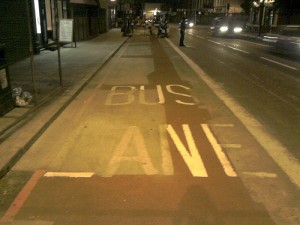 "You may have read this week about how John Griffin, the owner of Addison Lee, started the week off by instructing his drivers to ignore road laws by driving in the bus lane. As if that wasn't enough of a risk to cyclists by encouraging all minicabs to encroach on one of the few spaces in which cyclists feel safe, he ended the week by denying cyclists the right to wobble, claiming SMIDSY ("Sorry mate, I didn't see you!") is a defence once you've hit a cyclist and then rolled out the tired line about cyclists not paying road tax.

The Times have a great article pulling apart the latter statement, but the fact remains that John Griffin and Addison Lee are greatly increasing the risk to cyclists by ignoring road laws and denying their part in being responsible road users.

John Griffin has been trying to deflect the outrage to his statements back onto cyclists, calling for cyclists to take training and "pay up", rather than looking at his own actions which is the issue at hand.
Therefore:
LFGSS call upon all cyclists to:
The latter is to ensure companies are not complicit in encouraging Addison Lee drivers to flaunt road laws and increase the risk to cyclists and other road users. Many companies have compliance and ethics positions that should allow you as an employee to have Addison Lee taken off the books because of their disregard for laws and the safety of others.
This boycott should run until such a time that John Griffin makes a statement, on behalf of Addison Lee, in which he commits Addison Lee to fully respect all road laws and other road users.

Such a position will obviously immediately reverse the instruction to enter bus lanes that he gave to his drivers.

In addition to the boycott you may also wish to:
And on Monday there is a demonstration happening outside Addison Lee offices at 6pm."